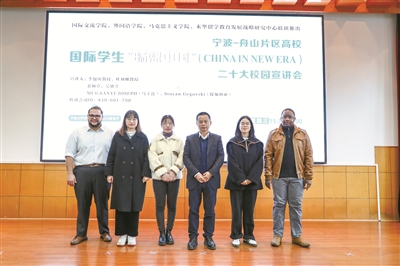 Faculties and students pose for photograph during the lecture. [Photo provided by Yu Yingzhuo]

In response to the 20^th National Congress of the Communist Party of China, Ningbo University has been active in the research, promotion and dissemination of the Congress's guiding principles. The University's Faculty of Foreign Languages and International College and Academy of Eastern Zhejiang Culture recently organized several thematic events to provide deeper insight into the Congress.

Shortly after the 550^th birthday of the Chinese neo-Confucian philosopher Wang Yangming, a book launch was held at his birthplace—Yuyao, Ningbo. Two bilingual collections of Yangming philosophy were featured: The Wisdom of Wang Yangming's Instructions for Practical Living and Studies on Translating Wang Yangming's Thoughts in the West, compiled by Ningbo University's Overseas Dissemination of Yangming Culture Group. These high-profile publications have won glowing praise from international scholars and experts such as George L. Israel, Professor of History at Middle Georgia State University. In early December, 2022, Ningbo University's translation course "Terminology Translation on Chinese Thought and Culture" went live on the UMOOC e-learning platform. Taught by leading translators from the Faculty of Foreign Languages such as Xin Hongjuan, He Ying, Zhang Zhi, Wang Yili and Puyang Rong, this much-acclaimed course has been acknowledged by China's Ministry of Education for its excellence.

A lecture titled "China in New Era", held on December 14^th, was the highlight of the event series, featuring numerous professors, international students and Chinese students: Profs. Duan Hanwu and Li Baogeng, Stoyan Gegoski from Bulgaria, Ugaanyi Joseph from Uganda, and two NBU English majors, Yu Yingzhuo and Wu Xinying. Their insightful speeches covered topics from the pivotal role of the CPC, a global community for a shared future, common prosperity for all, the "two mountains" theory to the Belt and Road Initiative.

Prof. Duan Hanwu, Director of Overseas Education Development Research Center, spoke about the context and significance of the 20^th CPC Congress and encouraged international students to discover the message it embodies. Prof. Li Baogeng, Dean of the School of Marxism Studies, pointed out that the Congress reviewed China's achievements over the past five years and its great transformations in the first decade of the new era, laid out the Party's missions and tasks on its new journey, and outlined the development goals and major policies of the CPC and the country for the next five years and beyond.

International students Stoyan Gegoski and Ugaanyi Joseph focused on topics relevant to China's diplomatic relations. Gegoski discussed the concept of a human community with a shared future, "The core values of China's foreign policy are 'mutual respect, equality and cooperation'. True to these values, China holds all countries, big or small, strong or weak, rich or poor, in equal regard." Joseph praised China's role in pursuing the Belt and Road Initiative, "China has successfully discovered a new way towards shared development, achieved mutual benefit for all countries, and provided a new driving force for global economic growth." Yu Yingzhuo and Wu Xinying shared their views from the standpoint of language learners and cross-cultural communicators. Yu explained the ideas behind "shared prosperity for all", while Wu spoke about the "two mountains" theory.

The 90-minute lecture in the auditorium of the Faculty of Foreign Languages was a lively event, attended by 169 international students from Ningbo and Zhoushan. Students spoke highly of the event, for it not only enabled them to better understand the blueprint for future development of China, but also gave them confidence and strength to participate fully in China's sustainable development and progress.

"Today's China is moving closer to the world stage's center," said Nawaz Mateen, a Pakistani PhD student from NBU's School of Marine Sciences, "International students, as an indispensable community in Chinese universities, will work with Chinese students to spread China's story." Rakib Mohammad Rakibul Hasan, a Bangladeshi postgraduate student from Zhejiang Ocean University, shared his perspectives, "We are foreigners, but we are not outsiders. The days we spend in China are filled with companionship, love, security, and an overall sense of well-being. China has impressed the world with its remarkable achievements. Looking forward to the future, we envision bright prospects for China's development."