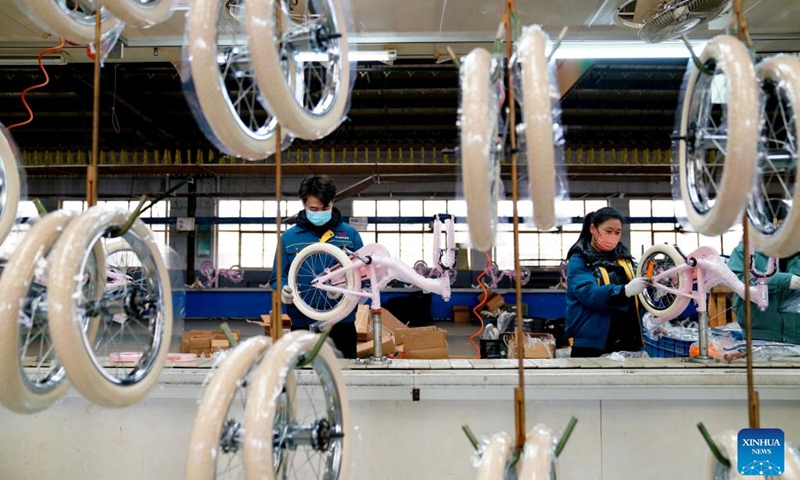 Workers are seen busy on the production line at a factory of a bicycle and baby stroller manufacturer in Pingxiang County, north China's Hebei Province, Dec. 27, 2022. (Photo: Xinhua)

Chinese companies and some localities are taking proactive measures to cope with the labor shortage that typically occurs during the annual Spring Festival holidays, doing their part to ensure the smooth operation of global supply chains.

The Spring Festival, which falls on January 21 to 27 this year, is a time when Chinese people, after a year of hard work, go back to their hometowns for a reunion. It means that manufacturing bases in coastal cities face an acute shortage of labor during the period.

This year the shortages will be affected by the optimization of China's COVID response and the efforts of many provinces to send teams to pursue orders overseas. Localities have ramped up measures to cope.

Wang Liucun, deputy general manager with Zhejiang Cipu Pools Co, told the Global Times on Wednesday that his company has wrapped up a large order from a European client. It's facing a labor shortage, and is now busily recruiting."

The backlog has piled up to April, and there is still a gap of 150 workers," Wang said.

The human resources department of Haishu district, Ningbo in East China's Zhejiang Province, where Wang's company is based, has offered to help.

A Haishu official told the Global Times on Wednesday on condition of anonymity that the department began to connect with hiring companies in Southwest China's Sichuan, a populous province, when data monitoring of nearly 200 companies in the district showed a rise of 10-20 percent in labor demand in November.

The district is subsidizing every nonlocal employee who returns to their jobs on their own with 100-500 yuan ($15-$73) transportation subsidies. A further allowance of 500 yuan per person will be given to companies whose social security payroll expands with new recruits in the first quarter, according to the official.

These efforts will reassure companies and their workers while temporarily easing the labor shortage.

A manager with a manufacturing company in Dongguan, South China's Guangdong Province, said that labor supply and demand are closely related to the orders backlog. He expected a peak in labor demand in early spring and believes the optimized epidemic response will bring more orders.

Bai Ming, deputy director of the international market research institute at the Chinese Academy of International Trade and Economic Cooperation, told the Global Times on Wednesday that efforts by Chinese companies and local governments have global significance.

"Due to China's status as the world's factory, Chinese companies often account for a large portion of the global supply chain, and as China's supply chain will keep running smoothly with the support measures, many of the goods will have a stable supply in global market," Bai said.

Chinese exports are facing multiple pressures including an expected decline in global demand in the new year, so handling labor shortages adeptly before, during and after the holidays will be conducive to the country's efforts to stabilize exports, Bai said. "It also means that companies can take as many orders as possible and not to have to ditch orders because of a lack of hands."

"We will not rest during the Spring Festival as we have many orders to deliver," a manager of a Ningbobased e-commerce company told the Global Times on Wednesday.

The manager said that the company has heard about subsidies for nonlocal laborers who stay in Ningbo and work during the holidays.

The Ningbo city government said on December 22 that every employee who comes from outside Zhejiang will receive a subsidy of 500 yuan if they stay in Ningbo and work for a local enterprise from January 21 to February 5.

In Urumqi, Northwest China's Xinjiang, the local human resource authority has handed out a onetime worker retention and training allowance worth 279 million yuan to nearly 70,000 companies, many of which have suffered difficulties amid the epidemic.

Companies that were forced to suspend operation for more than seven days in 2022 got a 500 yuan allowance for each worker on their social security payroll, local news portal ts.cn reported on Tuesday.

Some areas, from Shanghai and Zhejiang to Jiangsu and Fujian provinces, have rolled out measures, often including subsidies, to help ensure the supply of labor during the holidays.

Quanzhou in East China's Fujian Province will offer subsidies of 1,000 yuan per employee if an industrial firm keeps on production throughout January. The city also encourages the parents of migrant workers to spend the holidays in Quanzhou and plans to give a subsidy of 1,000 yuan to each family.

Other companies have coped by sourcing labor from outlying rural areas. For instance, some companies found that their production season occurs during agricultural downtime in northeastern provinces and directed their recruiting efforts accordingly.

Throughout the year, China kept up policy support such as helping companies to secure orders and stabilizing the expectations of market entities amid uncertainty, well as announcing measures to prop up micro-sized, small and medium-sized trade business.