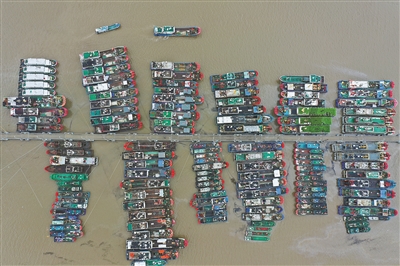 Many fishing boats are moored in the harbor to shelter from the typhoon in Xiangshan. ［Photo by Tang Yan］

Typhoon Muifa, the 12^th typhoon of this year, made landfall in Zhoushan's Putuo at around 8:30 PM on Wednesday, September 14th. Ningbo upgraded its typhoon emergency response to Level I at 5 PM on Tuesday. The city was greatly affected by the continuous downpours brought by the typhoon. City authorities responded actively, going all out to protect citizens and their property.

Ningbo experienced gales and torrential rainfall from Wednesday to Thursday. The city had made emergency preparations in advance and taken precautionary measures against possible geological disasters.

In coastal areas, all commercial and recreational fishing boats were ordered to halt activities and return to port to take shelter on Tuesday. Ningbo also suspended all 26 of the city's passenger ferry routes; more than 15,000 passengers were evacuated.

The Ningbo maritime authorities instructed all ships to seal their cabins, secure movable parts, and make sure their communication equipment is operational. Cargo vessels were advised to halt the loading and unloading of cargo and leave unsafe berths. Emergency rescue vessels were put on standby in port areas.

According to the Ningbo Bureau of Culture, Radio, Television and Tourism, 36 tourist attractions across the city had been closed by Tuesday morning. Residents were warned against going outdoors during periods of strong wind and rain.

In a series of efficient evacuation efforts, coastal fish farmers and fishermen returned to harbor to take shelter, while residents in hilly regions of the Siming Mountains, Yuyao, Yinzhou, Haishu were temporarily relocated. By 11 PM on Tuesday, 260,000 people had been moved to safety.

At 10 AM on Wednesday, in Ninghai County's Qiaotouhu subdistrict, about 350 migrant workers queued up to receive emergency food packages from a disaster shelter.

The makeshift homes that these construction workers live in pose a potential safety hazard during typhoon weather, which was why local officials of the Qiaotouhu subdistrict acted quickly to move the workers to a nearby shelter.

The shelter could accommodate up to 500 people and was supplied with water, instant noodles, masks, and rubbing alcohol. Five volunteers and a doctor were available around the clock to provide medical support and general assistance.

Earlier in the week, the Ningbo Education Bureaus issued a directive for all primary schools, secondary schools, kindergartens, and off-campus learning institutions to suspend classes on Wednesday and Thursday.

"I have many friends here to keep me company, and the activities were fun," Yu Zanyi, a fifth-grade student, said.

Offering daycare during a typhoon is a meaningful way for a community to support its citizens. This successful model will be rolled out across other parts of the city in the event of future typhoons and other extreme weather.

At the Ningbo North Expressway toll station on the morning of September 14^th, the staff worked in the whipping wind and rain, guiding incoming vehicles to the designated lanes for information registry and PCR testing. All of them were drenched, their raincoats soaked through and clinging to their bodies.

At the Cicheng toll station, where traffic was lighter, the staff could take shelter indoors from time to time. "From early this morning to 10 AM, we had to check more than 70 vehicles, mainly delivery trucks. The heavy rain is a challenge for us," said Zhou Xinhong, an officer from Jiangbei traffic police brigade.

At the Xiangshan Zhushanguo Rural Cooperative, farmers rushed to their greenhouses, ripping off the plastic film to deepen the irrigation channels.

Xiangshan's Xiaotang Township is the birthplace of the "Red Beauty", a premium citrus variety. 50% of the township's arable land is planted with oranges trees, half of which are "Red Beauty" trees. Xiaotang's annual output accounts for about a quarter of Xiangshan's total.

The Zhushanguo Cooperative has more than 80 "Red Beauty" greenhouses, harvesting 200 tons of citrus each year.

As the typhoon moved closer, orange farmers dug deep trenches in the greenhouse to prevent flooding, braving the heavy rain. They also installed cabling and bracing around fruit trees and made sure all irrigation channels in the greenhouses were cleared of debris. Netting was tied around the greenhouse, an additional layer of protection from the strong winds.