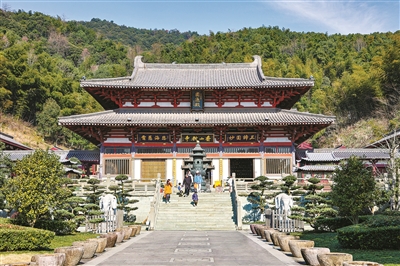 Xiangshan Temple, also known as Xiangshan Jiaosi (Xiangshan Preaching Temple), was founded in the 14^th year of the Tang Dynasty's Tianbao era, over 1,250 years ago.

The temple had received three imperial bestowments from past emperors. It was home to thousands of monks and attracted countless faithful believers. The Emperor Daizong of Tang once bestowed upon the temple two plaques bearing the temple's name. During the reign of the Jiajing Emperor of the Ming Dynasty (1521-1566), it was renamed Xiangshan Temple.

Historical records show that Xiangshan Temple is famous for producing numerous eminent monks and attracting renowned scholars. Many famous Chinese poets and philosophers such as Bai Juyi, Huang Zongxi and Hu Shifan had visited the temple.