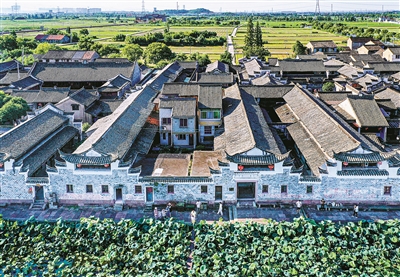 The thousand-year-old ancient village of Zoumatang is located in Jiangshan Town, Yinzhou District. It is considered "one of the oldest settlements in Ningbo, where many great scholars were born, surrounded by majestic rivers and hills, and embraced by fertile lands and rivers".

In the village, there are many ancient buildings from the Ming and Qing Dynasties (14^th to early 20^th century). The villagers are simple and honest folk. Throughout the dynasties, 76 scholars from Zoumatang received the Jinshi degree, the highest and final degree in the imperial examination in Imperial China, earning the village the name "home of China's Jinshi ".

Historical records show the village was built in 988 AD during the Duangong Period of the Northern Song Dynasty, when a family surnamed Chen moved to the area from Changzhou, Jiangsu Province. Eight Ming Dynasty buildings and many Qing Dynasty buildings are still standing. There are also three buildings from the early 20^th century, bearing typical signs of Western architectural influence.

In an old residence near the village's North River, one window's stone latticework form the Chinese characters第一(di yi, "number one"), meant to inspire younger generations to seize the first place; another window's lattice form the characters乾坤(qian kun, "heaven and earth"), serving as a reminder for younger generations to always keep the world in mind and serve the country.