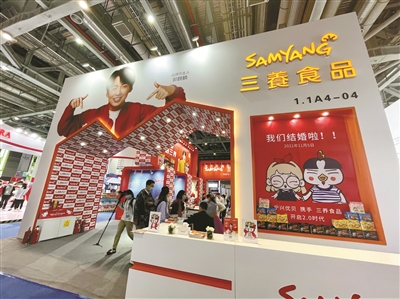 The fourth CIIE in Shanghai. [Photo by Shan Yuzifeng]

The world's top 500 companies were there to showcase their newest products and latest technological achievements.

It is worth noting that Ningbo plays an indispensable role in the production process of many global industry leaders.

On the afternoon of November 6, a business matchmaking session and partnership agreement signing ceremony between Ningbo and Belt and Road countries was held, as the most important event of the Ningbo Trade Mission at the Expo.

The 7 foreign investment projects include partnerships in chemical production and green technology, equity investment agreements, and value chain cooperation. The partners involved come from the US, Germany and Thailand.

'Made in Ningbo' Supports

In the automobile pavilion, Tesla, Volkswagen, and other industry leaders are displaying their latest products. As one of the trillion-yuan modern industry clusters Ningbo is building, Ningbo's auto industry is producing parts that are used up and downstream the auto manufacturing value chain. Many Ningbo auto parts makers, such as Xusheng and Tuopu, are Tesla's partners.

At present, Ningbo has more than 4,000 auto parts enterprises, including about 600 enterprises with annual main business revenues of RMB 20 million or more. The cluster effect is becoming increasingly significant.

In this year's list of top 100 Chinese auto parts enterprises, there are eight companies from Ningbo, two of which are Tesla's long-time supply chain partners.

"We have many customers in Ningbo and across the Yangtze Delta, and we hope to have better cooperation and development in Ningbo in the future," said Pan Yuchun, training manager of Tesla (Shanghai) Co.

In pursuit of "carbon neutrality", Toyota, Hyundai, Michelin and other well-known multinational auto makers and auto parts companies are becoming more involved in the manufacture of new energy vehicles (NEVs). However, Ningbo companies have already made the first move.

"As the world's leading manufacturer of pure electric vehicles, we hope to drive the synergistic development up and downstream on China's NEV value chain by building an advanced, green and sustainable factory model," said Liu Yang, head of product communication of Tesla China.

In the medical exhibition area of the Expo, the booth of MRK, the global pharmaceutical giant, is particularly impressive. In 2019, MRK set up a wholly-owned subsidiary specializing in animal healthcare in Ningbo's Hangzhou Bay New District; it invested over USD 40 million in the new Ningbo R&D center, which will become MRK's third-largest animal healthcare R&D center worldwide.

Nachi-Fujikoshi, a world-renowned industrial robot manufacturer, is a "dazzling star" in the technology and equipment section of the Expo. The dancing robots at its booth attracted many visitors to take pictures.

What is less known is that in Nachi-Fujikoshi's business roadmap, Ningbo, which has a strong manufacturing industry, has long been a very important part. Nachi-Fujikoshi has an office in Yinzhou, Ningbo, that handles the sales of industrial robots, bearings, machining tools and other product lines. Haitian Precision, a publicly-listed Ningbo company specializing in the manufacturing of CNC machine tools, is one of Nachi-Fujikoshi's main clients in Ningbo.

"Recently, I visited the company Ningbo Physis Technology. They want to expand their new product line and start providing motors for NEV. Our products are the perfect choice for such purposes," said Wu Xiaowei, sales and technical manager of Nachi-Fujikoshi. "We attach great importance to the Ningbo market, especially the local motor companies. I go to Ningbo at least once a month."

Hitachi Group's business manager Wang Xuming said, "I maintain contact with more than a hundred Ningbo mold and casting enterprises; the market there is large. With our technology, the production of molds can become easier and faster. A process that would otherwise take 5-6 hours can be shortened to 2 hours."

In the first three quarters of this year, Ningbo's GDP has exceeded one trillion yuan, with the secondary sector accounting for half of the total. Ningbo's small and medium-sized manufacturing enterprises are presenting attractive business opportunities for the world's leading advanced manufacturing companies.