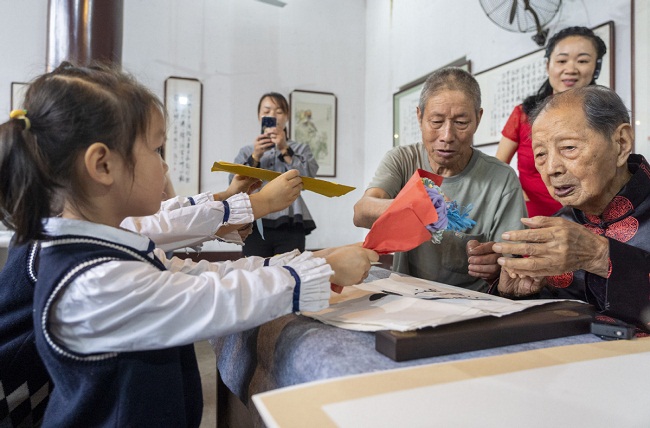 Kindergarten pupils present the characters they wrote and a bouquet as a gift to Chen Zhongcai. [Photo by Xu Mingyi/chinadaily.com.cn]

On a warm sunny afternoon before the the Double Ninth Festival, a traditional Chinese holiday to show respect to the elderly, 102-year-old Chen Zhongcai started livestreaming his calligraphy class at a cultural activity center in Shuiche village, Zhejiang province.

Around 20 people gathered with the gray-haired Chen, who was dressed in a black and red coat.

In front of them were tables, Chinese paper, ink containers and brushes.

Chen began learning Chinese calligraphy when he was 15 and has since practiced every day. Previously as a Chinese teacher at a primary school, Chen had taught calligraphy in his spare time. After retirement four decades ago, he devoted himself to teaching the art to nearby residents and spent up to four hours a day in class.

Before each class, Chen prepares samples and gives them to students.

A 39-year-old resident, Chen Zexu, is one of his students.

"I learned from teacher Cai for several years," he said. "Now, my daughter and son are also learning Chinese calligraphy from him."

For Chen, practicing Chinese calligraphy is more than mastering a skill; it also cultivates one's character and temperament, assists in nurturing a good life and develops disciplined study habits.

More than 20 school-age students from a local kindergarten also attended the class. They will learn Chinese characters next year, but Chen taught them to write the word ren, or people, hoping that they will be decent people in the future.